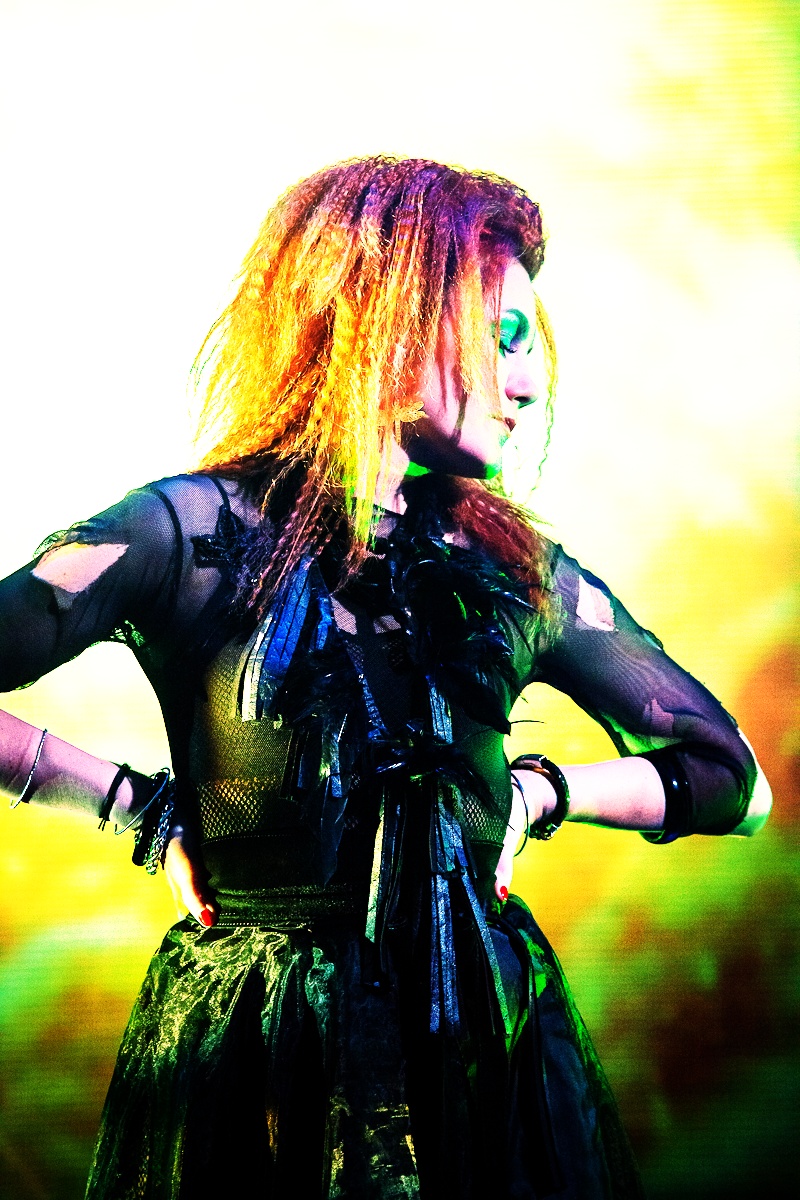 The body of work generally known today as Enochian is one of the most enigmatic and fascinating subjects of occult study. During the last years of the 16th century, this language and the system accompanying it was received and recorded by Englishman John Dee - considered by many the most educated man in England - and his countryman, the alchemist Edward Kelley, as the two men travelled from London to different points on the European continent, most notably through Poland to Prague and Trebona in Bohemia. They believed that what they were receiving through the technique of skrying was detailed instruction from Angelic beings. Over the time many books and articles have delved into the origins, possible meanings, and uses of the techniques and seemingly talismanic objects constructed for their use, but the source of the material and interpretations of its meaning and uses has remained unclear for most of the more than 400 years that have elapsed since Dee and Kelley´s journey. Unclear, that is until the relatively recent work of metaphysician and Enochian expert Vincent Bridges and collaborator Dan Winter, with the help of several of Vincent´s closest friends and magical practicioners. This has resulted in new theories, experimentation, and discoveries, leading to a deeper understanding of this rich and complex field of knowledge. Unlike those before him, Bridges viewed the Enochian work of Dee and Kelley not as an outgrowth of the western mystery tradition but as a literal intervention from outside. He and his students viewed it as a transformative system best described in energetic states, where even the letters themselves are functioning as waveguides. They saw Enochian as a system of 4th dimensional and higher geometries that, when properly set up, worked almost automatically. Just as the nucleus of human cells put out light or photon emissions that are automatically received by other cells, Bridges believed the “alchemy of light” generated by a correctly set-up Enochian Temple worked as a kind of bioenergetic machine provided to humans from the outside to help jump-start their own evolution. These objects that are formed work automatically by their shape or function as they exist physically in higher dimensions; they sing “Evolve!” to those parts of us that already exist in higher realms. /Terry Burns/

Iva Marešová - On How I Use the Enochian Calls.

When I met the Calls for the first time, my whole being could feel the strong transformational energy they carry. I did work on myself to be ready to handle this tool with necessary purity, humbleness, responsibility and love. Pure intentions are fundamental when working with this system, I believe. I would like to give thanks from the depth of my heart for all help to Vincent Bridges, homeopath Inka Pinkavová, and to all who participated in the recording process. Without their presence, sharing, support and work the Calls could not have been shared with the world in this form. Namely I thank Eliška Bridges, Ladislav Krapek, Eva and Dušan Leňovi, Jiří Šámal and Eva Kejvalová, Iva and Martin Růžičkovi, Michal Vašíček, Oldřich Řiháček and special thanks to Mr. Urbanik, custodian of the church at Zelena Hora. I am not a student of the Enochian system nor of magic. I am not a member of any group, society, or a follower of any cult or religion. I simply consider myself a conscious being very well able to connect with the energies I perform. It was from that standpoint that I approached the cooperation with Vincent Bridges and the Calls. I gave priority to my heart, feelings and intuition beforehand to decide if I would participate, and then to determine a way to do so. Personally, I believe that in the end we do not need any special magical objects or tools to be able to communicate with our inner self, with God, soul, or especially with our own DNA. At the same time, some things can help accelerate or amplify our evolutionary path: they can help us with this deep communication, and become part of our path in form of synchronicities. I perceive this work as uncontrolled improvisation; that is to say the Calls only went from the Source through me. And thus, here we are handing over the Calls as we received them on 18 November 2013. You must decide how you will work with the Calls. Nevertheless, I find it necessary to share the following information and suggestions based on my personal experience. After we recorded the Calls, I started working with the recording during private therapeutical sessions with my friends who showed interest in such an experience. During these sessions different situations and reactions occured which made me realize two basic rules which I observe when using the Calls: I must be in a secure space and grounded. By a secure space I mean such a place where you do not get disturbed by anything and anyone, and where you enjoy absolute silence. Before listening to the Calls it is good to purify the space. You can use fumigation, candles - do anything which enhances your feeling of peace and safety. For me personally that also means a prayer, which I consider essential before working with the Enochian system: “I - present in the Source - approach this work with love and respect, and I ask for wise guidance in harmony with God´s will and Cosmic Laws. Thank you.” That is a pure attitude free of the ego´s dominance and manipulation.

On this Approach to the Calls by Terry Burns, collaborator of Vincent Bridges

The vocal performances on this CD offer a unique experience to both lovers of music and students of the work of John Dee and Edward Kelly. Performed by Czech vocalist Iva Maresova, this recording of the 19 Ophanic Keys, better known as the Enochian or Angelic Calls, comprise a new and unique interpretation of this culminating aspect of the Enochian corpus. These were recorded in the magnificent, Hermetically inspired and Santini-designed Church of St. John of Nepomuk at Zelená Hora, in Žďár nad Sávazou, Moravia, Czech Republic. A Unesco Heritage site, this edifice has both amazing acoustic properties and astounding energetics resulting from the powerful geophysical properties of the hill and surrounding area, which is then collected and amplified by J. B. Santini - Aichel´s architectural rendering of the Church and its enveloping structure. As Iva Marešová points out, she has no training in Enochian - but as her fans know, she has an incredible voice combined with a strong intuitive sense on how to connect to the energy around her, in this case the Enochian energy as evoked by Bridges. er interpretations - her key words - of what she felt for each call might be far from any conventional interpretations, if such a thing exist, and they do not have to connect to English translations of the Calls. But they just might be a purer interpretation. Of all the components of the Enochian system received by Dee and Kelley, the Calls are most problematic because John Dee simply recorded the long Enochian Calls that Edward Kelley was receiving, and then the equally long translations. Many researchers have speculated that Kelley’s „filter“ could have made the translation somewhat „off,“ and different people (Bridges included) have worked at alternate English translations. Perhaps Marešová’s approach – simply performing them, and noting what one feels – gives us a better way, an approach informed by sensitivity and „beginner’s mind“ rather than by attempts at getting into the minds of two long-dead Renaissance magicians. Vincent Bridges felt that the Calls were a gift given to humanity to help us evolve. In „Angels in the DNA“ and in his work with Dan Winter, Bridges suggested that the uniquely structured Enochian „alphabet“ might do this by resonating with our very genetic code. Simply put, they might prepare humanity to become citizens of the cosmos rather than „killer monkeys.“ Bridges and Winter looked at what some call „magic“ as a physically explainable interaction of light and sound waves best amplified by structures designed with particular energetic features, and spoke of the calls literally as carrier waves that help synchronize our bioenergetics for the next leap in human development. He felt the Calls were always something best performed or listened to for the benefit of all. Marešova performs the calls with Czech phonetics, something Bridges thought was critical. You will feel it! She began by deeply and consciously connecting with the Source, and invites her listeners to do the same. The experience of listening to Iva being connected with the Source, performing the calls in magical space set up by Bridges within the architecture of Santini, will bathe you in energies that few are able to actually create on their own. Iva´s singing, performed in a highly charged and energetically prepared space, draws powerfully on Enochian in a way that might take a solo student years to approach. Accompanying Iva´s vocal performance is Jiří Šámal on hang drum. Iva´s beautiful voice serves as a carrier wave for the energy of the calls, and of the powerful energetic transmitter that is Zelená Hora. The result is an intensely moving performance with many revelations for the committed listener. 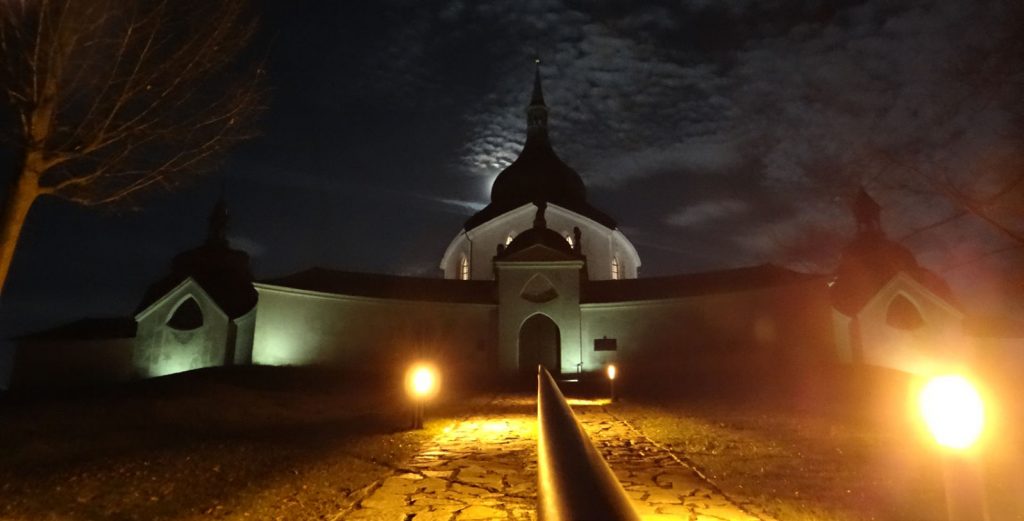 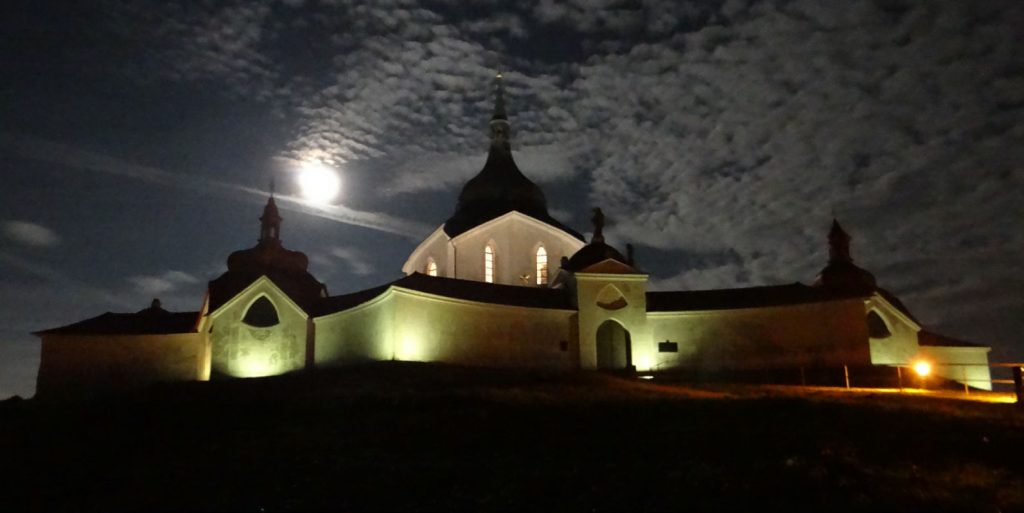 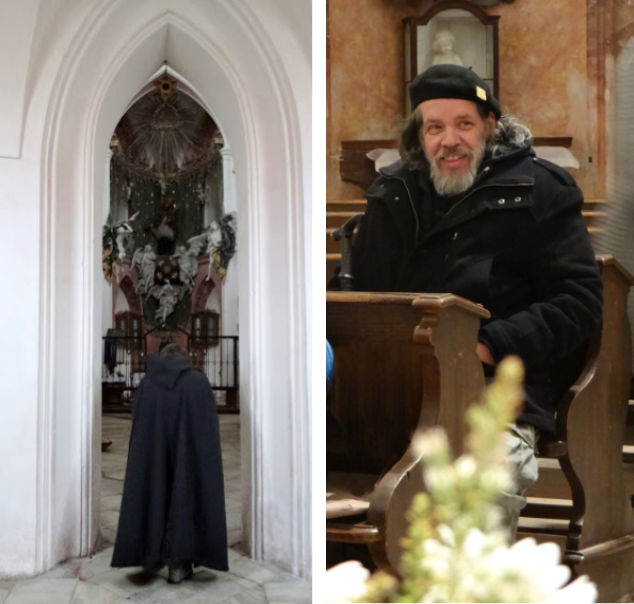 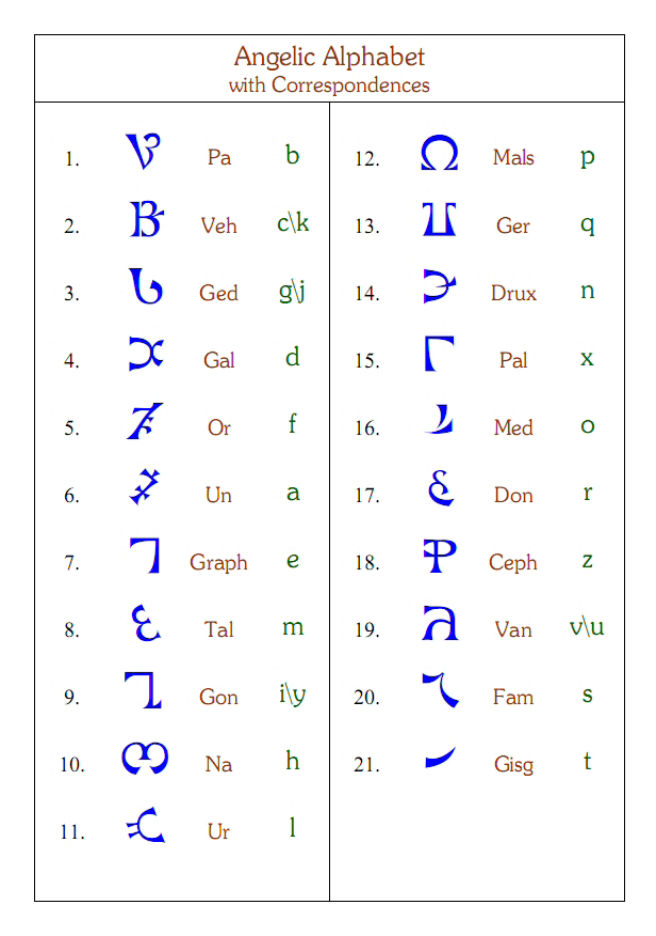 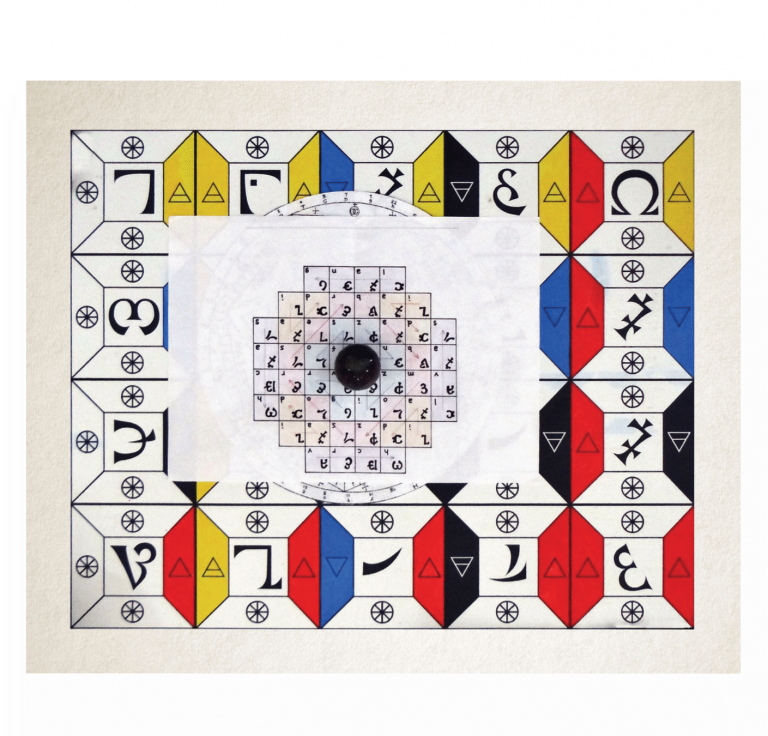 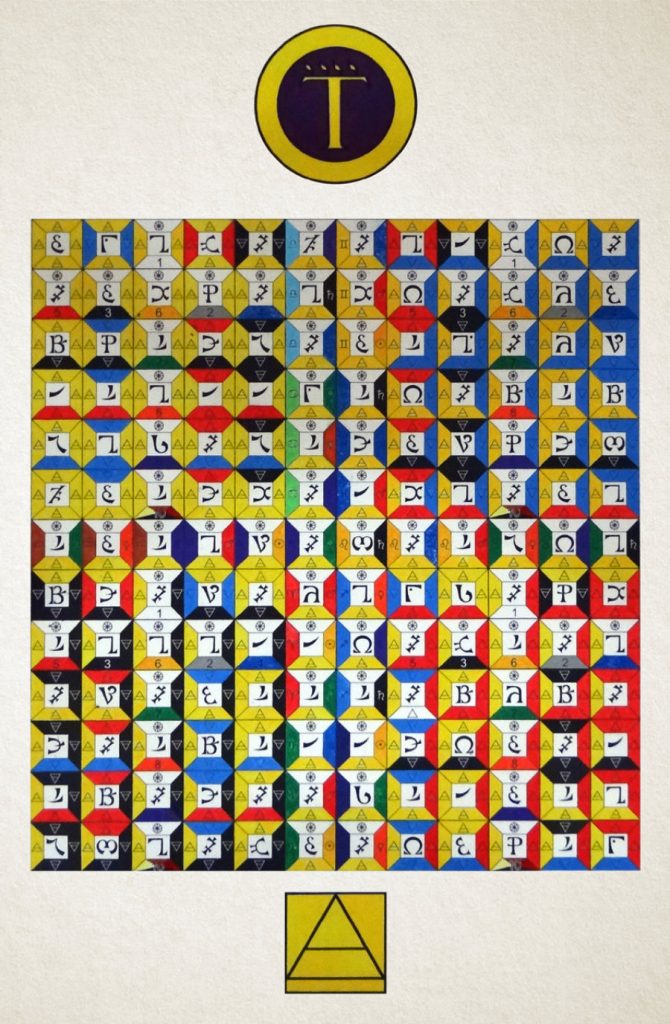 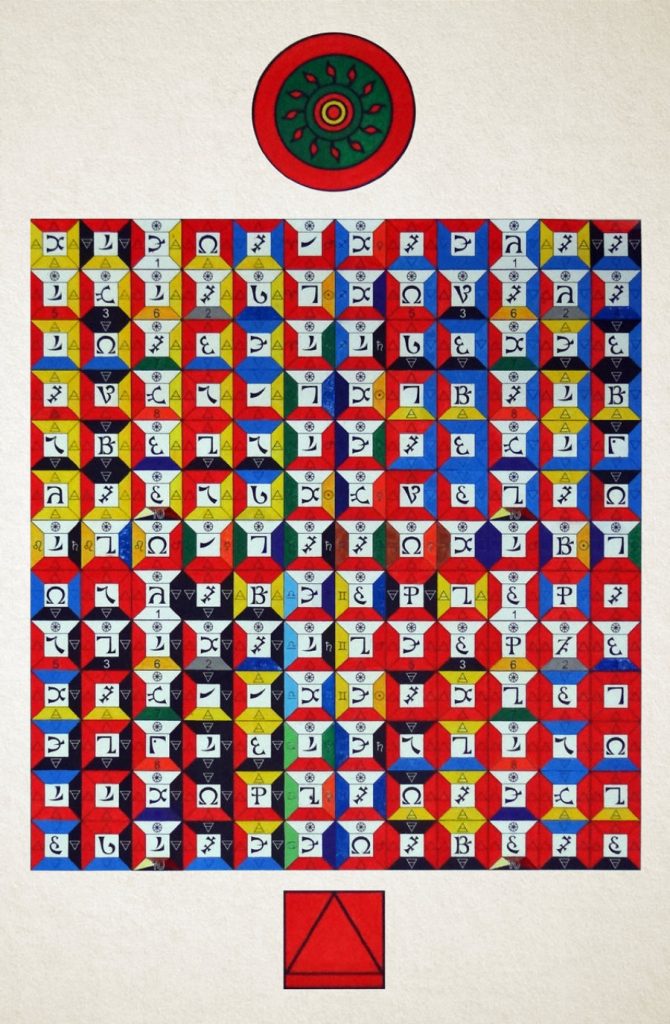 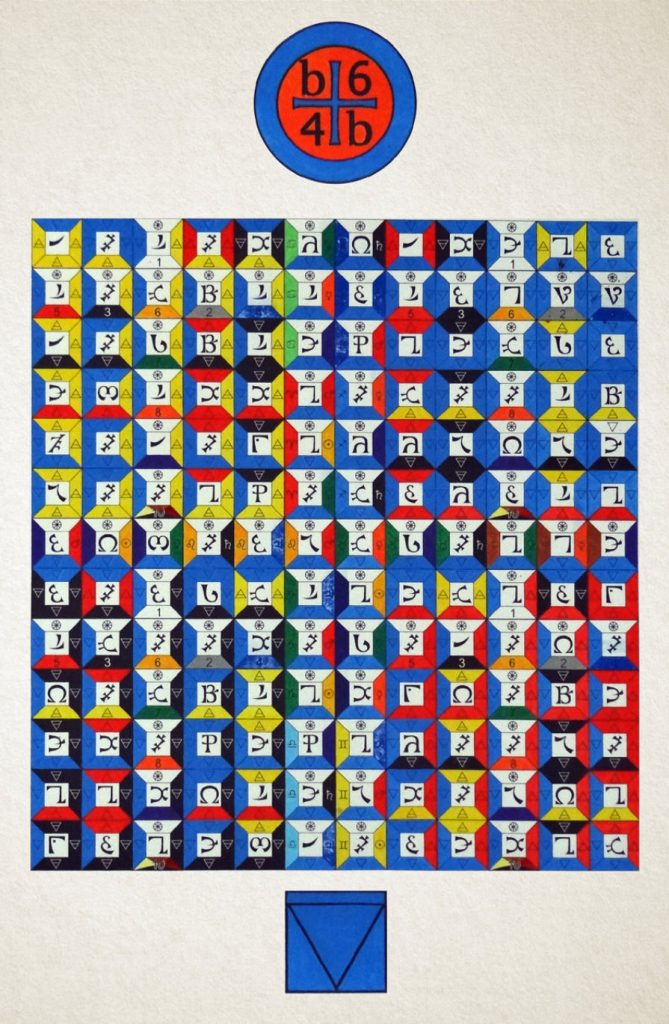 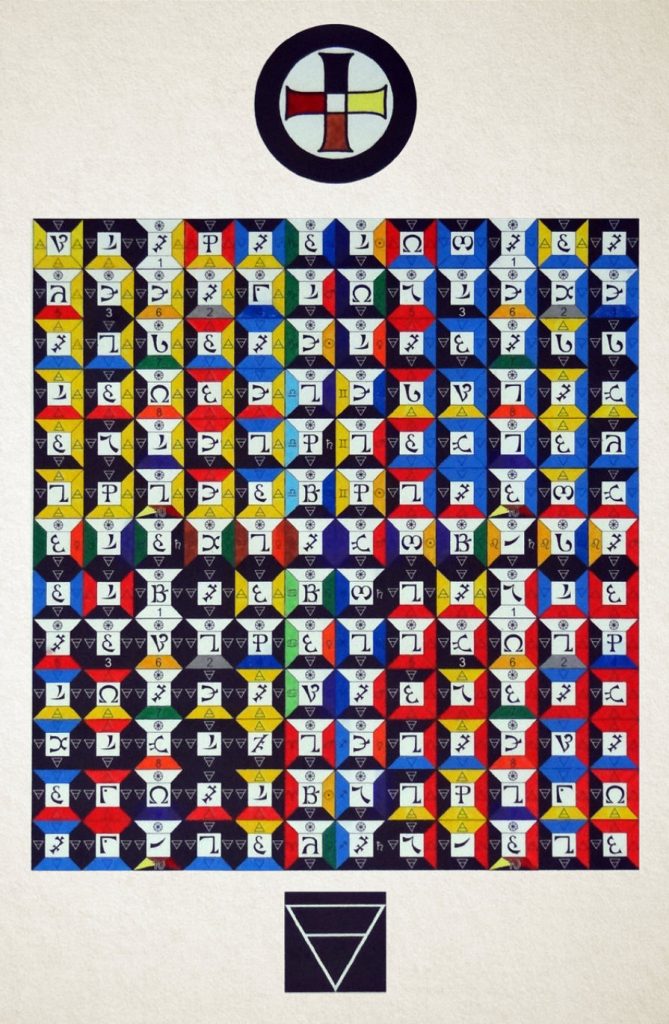 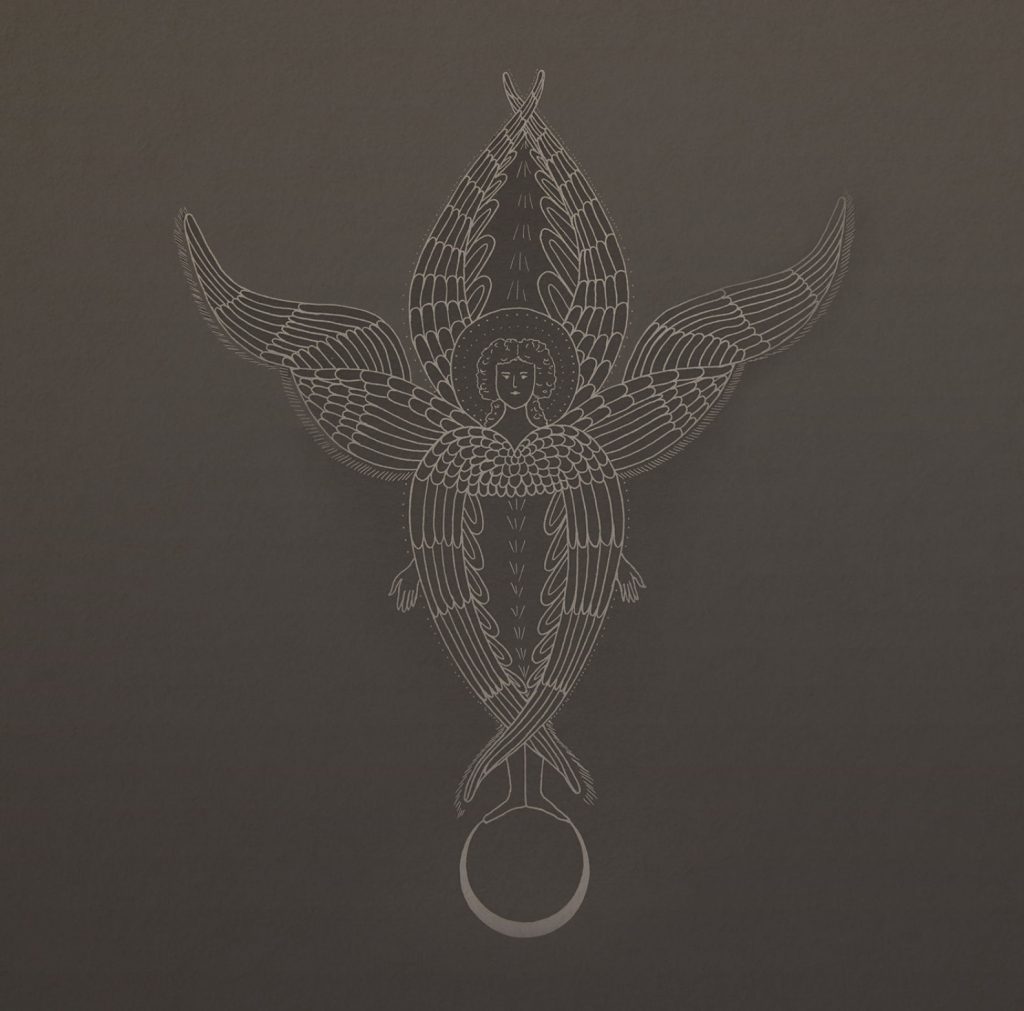